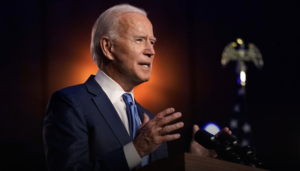 Joe Biden, the 46th president of the United States, defeated Donald Trump in November’s election and has pledged to restore “the soul of America.”

“Our nation is shaped by the constant battle between our better angels and our darkest impulses,” Biden said in his first speech to the nation as president-elect. “And what presidents say in this battle matters. It’s time for our better angels to prevail.”

For more than 35 years, Biden represented Delaware in the US Senate. He resigned in 2009 to become vice president under Barack Obama.

“With the campaign over, it’s time to put the anger and the harsh rhetoric behind us and come together as a nation,” said Biden, a Democrat who turned 78 in November 2020. “It’s time for America to unite. And to heal.

“We are the United States of America. And there’s nothing we can’t do, if we do it together.”